These were the words of Rolf-Dieter Heuer, director-general of the particle physics laboratory CERN in Switzerland, on July 4th 2012, and officially announced the discovery of the long-sought Higgs Boson particle. But while evidence for the existence of the ‘God particle’ may have been the breakthrough of the year (if not the decade), there have been plenty of science stories grabbing headlines, both for innovation and controversy. Read on for a reminder of the stories you saw, and a few that may have slipped past you as well.

The discovery of the Higgs Boson particle has not been easy – it took months of gathering data from over 500 trillion particle collisions at the Large Hadron Collider (LHC) at CERN. The staggering amount of data collected finally allowed the researchers to confidently claim that the new boson they had found, with a mass of 125 gigaelectronvolts, was indeed the elusive Higgs Boson, as predicted by theorist Peter Higgs almost 50 years ago. The existence of this particle is crucial to the Standard Model of physics – although somewhat unfortunately no other particles have yet been discovered. Baby steps, I suppose.

Sometimes, though, the understanding of our world, solar system and universe just cannot be achieved with a particle accelerator; sometimes you need a hovering sky crane gently lowering a rover in the middle of a crater. Only NASA could have achieved a feat such as this, and in August the first low-resolution images from the Curiosity rover were received from Mars. While no signs of life have yet been confirmed, soil samples analysed by Curiosity reveal a surprisingly close composition to that of Hawaii. Further afield, more and more exoplanets are being discovered, with the closest one yet a mere 4.4 light years away orbiting Alpha Centauri, while another exoplanet 40 light years away is believed to be made entirely of diamond. 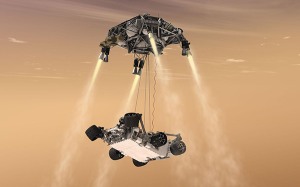 Despite these successes, NASA’s monetary support from the US government continues to dwindle, even resulting in NASA holding a cake sale to highlight this. Their lack of funds may pave the way for more commercial enterprises – this year saw SpaceX’s Dragon spacecraft rendezvous with the International Space Station, and of course Red Bull made Felix Baumgartner’s ascent (and rather more rapid descent) to the stratosphere possible.

CERN was not the only organisation to acquire large amounts of data this year – the Encyclopedia of DNA Elements (ENCODE) project collected 15 terabytes of data over 5 years in order to characterise all of the ‘functional’ parts of the human genome. They predict that at least 20% of the genome is involved in regulating gene expression – with genes for proteins themselves making up just 1% of the total DNA. Another ambitious project was the start of mapping the wiring of the mouse brain, a project which complements the Human Connectome project also currently underway. With mouse models being common throughout neuroscience, understanding the similarities and differences between human and mouse brains will be invaluable in elucidating the mechanisms behind conditions such as Alzheimer’s disease and schizophrenia. In medical science, stem cells continue to show their potential in treatment with the (controversial) discovery of stem cells in women’s ovaries which are capable of producing new eggs; this alongside the creation of egg cells from stem cells in mice by Japanese scientists in October. A powerful new painkilling substance with fewer side effects than morphine has potentially been found in a truly unexpected place – the venom of the Black Mamba snake. It appears to work by a different mechanism to conventional painkillers, although in its current form (being transmitted along with incredibly potent neurotoxins when bitten by one of the deadliest snakes in Africa), it probably isn’t quite ready for mass release.

The death of Lonesome George, the last known individual of the Pinta Island tortoise subspecies and symbol of the Galapagos Island conservation effort, occurred in June. But as extinction occurs, so too does the discovery of new species, with two of the world’s smallest vertebrates being found this year – Paedophryne amanuensis, a frog of just 7mm from Papua New Guinea, and Brookesia micra, a dwarf chameleon from Madagascar (juvenile pictured). 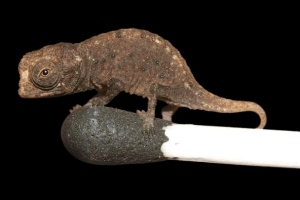 And, of course, no life sciences review would be complete without mentioning at least one GM story. University of Wyoming scientists genetically engineered silkworms to produce large amounts of spidersilk, which has higher tensile strength than that of steel. Future applications may include sutures and body armour.

Out of the Lab

While this year may have seen some major scientific advances, controversy has never been far behind. A paper describing mutations to an H5N1 avian flu strain so that it was able to infect ferrets by air was initially only allowed to be published if certain details were left out. Only 5 mutations were required, and the US National Science Advisory Board for Biosecurity (NSABB) was concerned that the information could be dangerous in terrorist hands. Eventually, the paper was published some months later.

At the same time, there has been a huge push for more transparency and open access to peer reviewed work. A key spark in this explosion was the boycott of Elsevier, Dutch publishing giants who critics claim charge too much for their papers, and are opposed to open access. While the campaign may have seen scientists stepping up to be heard, another story this year may cause the reverse – in October, 7 men were convicted of manslaughter for providing falsely reassuring statements before a major earthquake hit the area around L’Aquila, resulting in over 300 deaths.

So there you have it – 2012, a year dominated by Olympic sport, has come to an end, and with it a year of discoveries, inventions and exploration. If there is one concept and, in the case of 2012, one headline-grabbing event, to sum up some of the biggest breakthroughs of the year, and to sum up science in general, it must surely be: Curiosity. Here’s looking forward to 2013.